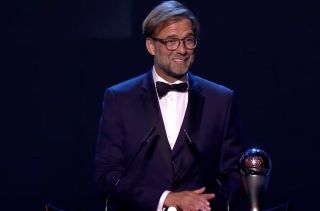 Jurgen Klopp was crowned FIFA Best Men’s Coach for 2019, and the Liverpool boss gave a classy acceptance speech in Milan on Monday night.

As seen in the video below, the German tactician was given the award after a memorable year for the Merseyside giants as they lifted the Champions League.

Some will argue that perhaps Pep Guardiola should have landed it given his domestic treble with Man City, but ultimately it was his Premier League rival who scooped it.

Putting that to one side though, Klopp gave a brilliant speech in which he praised Guardiola and Pochettino for the “incredible job” that they’ve done at their respective clubs and ultimately suggested that victory in the Champions League final was the only reason why he won it ahead of the Tottenham boss.

Meanwhile, Klopp was also keen to stress the importance of the players at his disposal and the Liverpool hierarchy for essentially putting him in a position to win, while he also combined that with some comedy as only he knows how as he showed real class in accepting the first major award of the night.