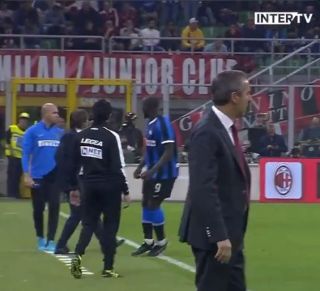 There were times last season where Romelu Lukaku didn’t look like he knew how to use his physicality to his advantage. There’s a chance even Antonio Conte will be scared of him after this incident.

The Video was shared by the Inter Milan Twitter channel as it shows the Belgian celebrating. Conte goes in for a handshake but gets much more of Lukaku than he bargained for:

The Former Chelsea men embrace in some sort of chest bump and it sends Conte flying back a good few steps. He actually does incredibly well to keep his feet when most men would be sent tumbling.

The decision by Man United to let Lukaku go is looking worse with each game that passes. He’s scored three goals in his first four games as United continue to look toothlesss going forward. I also reckon there’s no chance Ole Gunnar Solskjaer stays standing after taking that hit either.