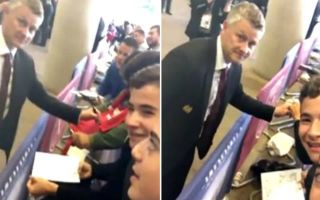 The Red Devils suffered a 2-0 defeat at the hands of the Hammers thanks to goals from Andriy Yarmolenko and Aaron Creswell. Following the match, Solskjaer was signing autographs when two young fans were mocking him.

This is shocking behavior no matter how poor the team is playing it’s never acceptable to be like that. Absolutely classless. pic.twitter.com/GnZs2pKYGE

The Norwegian can be seen posing for a picture as the youngster with the cell phone says: “Sacked in the morning, do you reckon?” The guy standing next to him replies: “Yeah probably”. Many people who have replied to the aforementioned tweet believe that the two are Arsenal fans.

Whether they were fans of Arsenal or West Ham or any other club, this was downright rude. It was a very disrespectful thing to say to a man who is easily among the finest footballers his country has ever produced and is now managing one of the biggest clubs in the world.