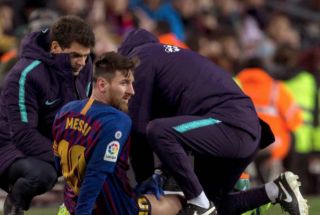 Barcelona coach Ernesto Valverde has downplayed Lionel Messi’s injury blow but conceded that further tests will be needed to find out the extent of the problem.

The Catalan giants ran out 2-1 winners over Villarreal on Tuesday night, with goals from Antoine Griezmann and Arthur sealing their victory.

However, it came at a price, as Messi came off with an injury concern, having only just returned from a calf problem picked up prior to the campaign which had sidelined him in the opening games.

The Argentine talisman had been building up his recovery after substitute appearances against Dortmund and Granada, and was finally named in the starting line-up against Villarreal.

Now though, he could face another spell on the sidelines, although Valverde seemed to downplay the issue by suggesting that he was replaced as a precaution.

“When something happens to Leo, everyone stops, in the field and in the stands. He already passed Sevilla a year ago when he broke his arm,” he is quoted as saying by Mundo Deportivo.

“There is discomfort in the adductor and we have preferred not to risk him. It doesn’t seem like anything else but we will wait for tomorrow.”

Nevertheless, Mundo Deportivo report that he is likely to now miss the clash with Getafe on Saturday, and so Barcelona will hope that Messi can recover and be ready to feature against Inter in the Champions League next Wednesday.

Based on Valverde’s comments, it sounds as though it isn’t too serious, but naturally given his importance to the side, Barcelona will not want to take any chances.