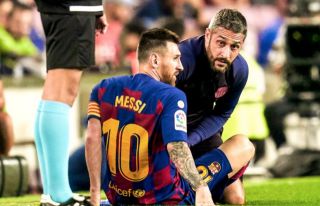 Barcelona have been handed another setback regarding the fitness of Lionel Messi, after it was reported that the player is set to miss his side’s match vs Getafe this weekend due to injury.

Messi started his first game of the season tonight against Villarreal, with the forward even bagging an assist for his troubles in the first half after Griezmann headed home his corner.

45 minutes was all Messi was allowed tonight, as he was taken off at half time for Dembele after seemingly picking up a knock in the first half, one that required him to leave the game in order to receive treatment.

And now, following the match, it seems like Messi’s sustained another injury problem, as La Transmissió d’en Torquemada are noting that the Argentine is out of their game against Getafe at the weekend, with more tests to be done on his injury tomorrow.

Given that Messi had only just recovered from an injury, this news will come as a big blow for the player and the club, as it seems like he could be out for another extended period of time.

Juanfran to depart Brazilian club; heads to Spain to ponder on his future

Given Barca’s horrid away record, they’ve would’ve loved to have Messi available for their trip to Getafe this weekend, however following this news, it seems like the Argentinian international will be playing no part in the match…