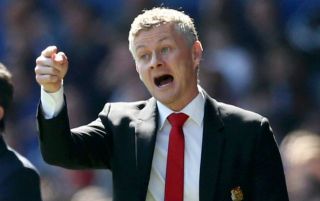 Man Utd face Rochdale in the League Cup on Wednesday night and Paul Pogba has been tipped to feature by his boss Ole Gunnar Solskjaer.

The 26-year-old has missed the last three games across all competitions after suffering an ankle injury, having contributed two assists in four outings prior to that.

As a key creative force in the United midfield, Solskjaer will undoubtedly be eager to see Pogba back at his disposal sooner rather than later, and after the Red Devils released some early team news ahead of their encounter with Rochdale, it sounds as though the Norwegian tactician is ready to give his talisman some minutes to get his fitness back.

“He’ll probably get some minutes against Rochdale,” he said, as per the club’s site. “But we definitely think he’s ready for Arsenal.”

That will be a huge boost for Man Utd given what Pogba can add to the team when in form, especially if it means that he’ll be set to feature against Arsenal at the weekend as United look to try and haul themselves back into the mix for a top four finish in the Premier League this season.

However, it wasn’t all good news in the injury update, as the report went on to add that Marcus Rashford, Anthony Martial, Luke Shaw and long-term absentee Eric Bailly will miss the clash with Rochdale and so that would seemingly put their involvement against the Gunners in doubt too.

Time will tell if they make enough progress in training during the rest of the week to give Solskjaer a potential selection headache, but he won’t want to risk seeing them suffer a fresh setback if brought back too soon and in turn spend a lengthier spell on the sidelines as a result.