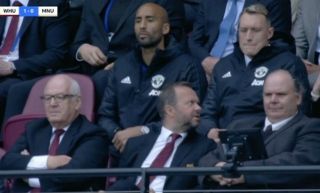 Advisers of Manchester United defender Phil Jones claim he was only saying “poor, that” instead of “sacked in the morning” in response to a viral video that did the rounds after the Red Devils’ 2-0 loss to West Ham on Sunday.

As we reported, many fans thought Jones looked to be joining in with a “sacked in the morning” chant aimed at struggling United manager Ole Gunnar Solskjaer, with Ed Woodward then seen turning around and appearing to tell someone off.

However, according to the Times, sources close to Jones deny this and give their explanation of what the 27-year-old was saying, which is far more innocent.

The Times also claim Man Utd have responded to the Woodward incident, stating he was talking to another member of staff and not having a go at Jones.

Phil Jones: "Sacked in the Morning.”

Any lip readers about? I’m pretty sure Jones gets told to shut up!? #WHUMUN pic.twitter.com/tkGYh621Nh

This all sounds far more plausible, as it’s hard to imagine a player employed by the club would risk embarrassing themselves, their manager and the team in this way when cameras could clearly be on them.