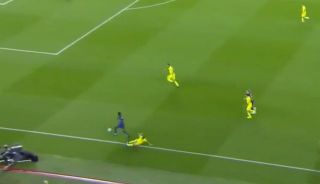 Barcelona starlet Ansu Fati is continuing to make quite the impression this season as he shone after coming off the bench against Villarreal.

The Catalan giants secured a 2-1 win at the Nou Camp on Tuesday night, getting back to winning ways after suffering a defeat to Granada at the weekend.

It wasn’t all good news though as Lionel Messi was forced off in the first half after suffering an injury setback, and so depending on the severity of the problem, it could open the door for others to step in and fill the void.

Fati was introduced in the 78th minute in midweek, but that was more than enough time for him to put on a show, based on the videos below.

As seen in the clips, he dazzled on the ball as he produced some superb link-up play with Frenkie de Jong, while he caused the Villarreal backline countless problems in a short space of time with his quality on the ball.

Still just 16 years of age, Barcelona look as though they have a serious talent on their hands as he’s already bagged two goals and an assist in five La Liga outings this season.

? The move didn't come off in the end but great combination play from De Jong and Fati pic.twitter.com/O6TrNf8FOB

? Rising star Ansu Fati is just on the pitch and he already has the Camp Nou crowd on the edge of their seats! pic.twitter.com/R9w4lnivHN