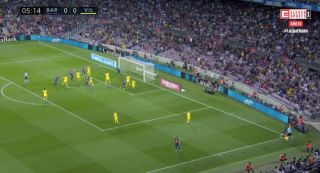 Antoine Griezmann scored his third goal of the season tonight, as he headed home following a corner from Lionel Messi to hand Barca the lead vs Villarreal in La Liga.

The Blaugrana are taking on Villarreal at home tonight, as they look to get back to winning ways in the league following their loss vs Granada at the weekend.

? Griezmann glances a header in at the near post!

?? A dream start for Barca against Villarreal pic.twitter.com/aN7yPqbVey

And Valverde’s men have made the perfect start in their attempts to do this, as Griezmann headed home just five minutes into their match tonight.

The Frenchman met a near-post corner from Messi, nodding home via the crossbar to open the scoring at the Nou Camp.