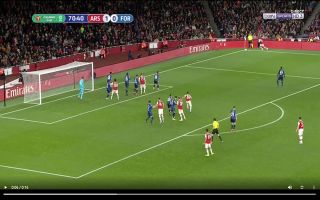 What a wonderful moment this is for Arsenal star Rob Holding, the defender has scored a sensational header for the Gunners on his return from injury.

In the 70th minute of this evening’s Carabao Cup clash between Arsenal and Nottingham Forest, Rob Holding was left free in the box after Reiss Nelson’s pinpoint corner and the centre-back scored a bullet of a header on his return from injury.

The defender has been out for over nine months after he suffered a serious knee injury against Manchester United last season.

Take a look at the 24-year-old’s header below:

ROB HOLDING IS BACK LADIES AND GENTLEMEN!! ? pic.twitter.com/NXGJVx93XN

Holding established himself as a starting centre-back for the Gunners before his heartbreaking injury setback, it’s great to see that the ace is back and Unai Emery should look to the former Bolton star to solve his defensive issues.