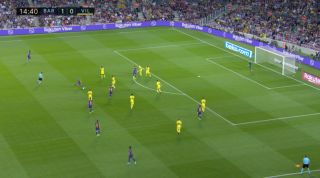 Arthur Melo scored an absolute thunderbolt for Barcelona this evening, as he doubled his side’s lead against Villarreal at home.

Having already gone 1-0 up earlier on the match thanks to Antoine Griezmann, Arthur added to his side’s tally midway through the first half with a stunning strike.

? WHAT A HIT FROM ARTHUR!

? Asenjo had no chance and Barca double their lead! pic.twitter.com/B9l6omhNVg

What a hit from Arthur Melo?. pic.twitter.com/nTOAO57CTE

After being given the ball by Busquets, Arthur lined-up up a shot, as he fired home from a good 30-yards to score a simply superb brilliant second for the Blaugrana.