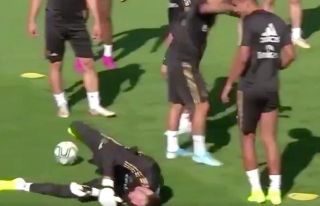 Zinedine Zidane would have had a little scare in Real Madrid training this week as Thibaut Courtois appeared to nearly take out Eden Hazard.

As seen in the video below, the Belgian goalkeeper was the man in the middle trying to win the ball back in a group exercise during training.

However, he lost his footing as he went in to try and retrieve the ball from Hazard and he ended up collapsing in a heap on the ground while his compatriot appeared to initially limp away.

He didn’t get any sympathy from his Real Madrid teammates though as they all seemingly found Courtois’ failed attempt to win the ball hilarious as it probably shows why he’s better off sticking with the day job and staying between the posts.

Nevertheless, Zidane will be hoping that Hazard didn’t suffer any damage as he’ll want Real Madrid to build on their win over Sevilla at the weekend and come out the other side of a tricky period to start the campaign.