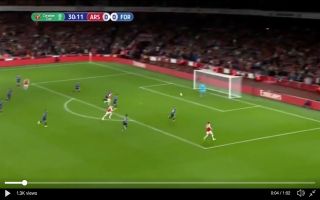 Brazilian sensation Gabriel Martinelli scored his first goal for Arsenal in impressive style, the 18-year-old nodded a bullet header into the net against Nottingham Forest.

In the 31st minute of this evening’s Carabao Cup clash between Arsenal and Nottingham Forest, youngster Gabriel Martinelli scored his first goal for the Gunners.

The ace arrived from Brazil this summer.

Versatile defender Calum Chambers fired a lovely cross into the box after a pinpoint pass from Reiss Nelson and Martinelli battled with Forest’s defenders before nodding the ball into the back of the net with a bullet header.

Check out the youngster’s goal below:

Martinelli has a really exciting style of play that will make him a fan favourite very quickly.