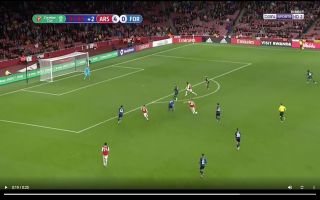 Brazilian sensational Gabriel Martinelli has proved that he’s one of the Gunners’ most exciting talents with an exceptional performance against Nottingham Forest.

Arsenal ace Gabriel Martinelli rounded off an amazing performance by the Gunners with a sensational goal in the final stages of this evening’s Carabao Cup tie with Nottingham Forest.

The 18-year-old picked up the ball from Calum Chambers and charged towards the Forest goal, the ace curled a lovely effort into the top corner from 20 yards out to make it 5-0 to Arsenal.

Check out the summer signing’s second of the night below:

What a goal from Martinelli. Remember the name pic.twitter.com/UBkWZok8cT

Martinelli scored his first ever competitive goal for the Gunners earlier in the clash, the lightning-fast forward steered a lovely header into the back of the net to open the scoring.

After Martinelli’s masterclass tonight, some Arsenal fans will be pestering Unai Emery to give the ace some more minutes in the Premier League.

Should he feature against Manchester United next Monday?