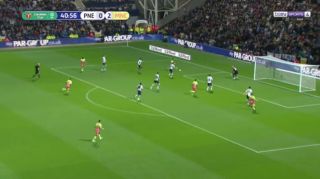 Raheem Sterling and David Silva combined to force a third goal for Man City in their League Cup clash vs Preston today, as they took a 3-0 lead at Deepdale.

Having already been two goals to the good thanks to Sterling and Jesus, the away side found a third before half time following some good work down their left hand side.

After being given the ball, Sterling looked to take on his man before laying it off to Silva, whose cross was turned into the Preston net by one of the Preston defenders.