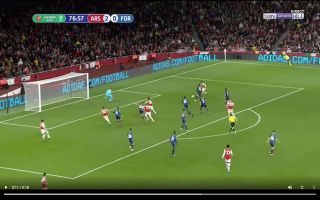 Arsenal ace Joe Willock scored with a composed finish against Nottingham Forest after star Hector Bellerin laid on a perfect assist after coming off the bench.

In the 76th minute of tonight’s clash, Hector Bellerin launched an audacious shot on goal immediately after coming off the bench for the Gunners.

The star right-back’s shot was ultimately blocked but he picked the ball back up after a pass from Shkodran Mustafi and put the ball on a plate for 19-year-old sensation Willock.

The starlet confidently slotted the ball into the back of the net.

Check out the midfielder’s goal below:

Arsenal fans will love to see that Bellerin’s attacking prowess is still there after his lengthy injury layoff, the Spaniard is a crucial player for the Gunners and his lung-busting runs from right-back are massive for the team.