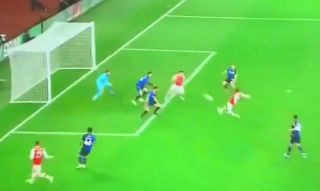 Arsenal secured a 5-0 win over Nottingham Forest in the Carabao Cup on Tuesday night, with Reiss Nelson getting on the scoresheet.

It was an enjoyable evening for the Gunners as they comfortably secured their place in the next round against their Championship opposition.

Having only gone in at half-time 1-0 up, it looked as though it could have been a tense night, but a blitz in the second half saw the hosts score four goals in 20 minutes as they made the win safe.

As seen in the video below, Nelson was on target as he grabbed Arsenal’s fourth of the night, and so Unai Emery will be pleased that after rotating and giving others a chance to impress, he got a positive reaction and more importantly a big win to boost morale.

For Nelson though, it was another big boost for him as he tries to secure a more prominent role moving forward.