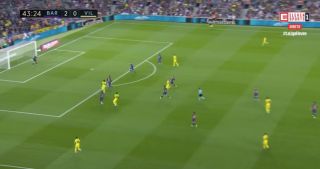 Santi Cazorla showed he’s very much still got it this evening, as he scored an absolutely stunning 30-yard strike to give Villarreal a way back into their match vs Barcelona.

Cazorla’s side were 2-0 down heading towards half time following goals from Griezmann and Arthur, however this deficit was halved just before the interval thanks to a stunning strike from the Spaniard.

This is how Cazorla answered.. what a strike pic.twitter.com/hxmNhw0f0S

? Villarreal get a foothold just before the break and will start the second half 2-1 down at the Camp Nou pic.twitter.com/TiThiLyfCV

After picking up the ball 40 yards from goal, the midfielder strode towards Barca’s net before unleashing a rasping 30-yard drive with his weak foot, leaving Ter Stegen with no chance in the process.