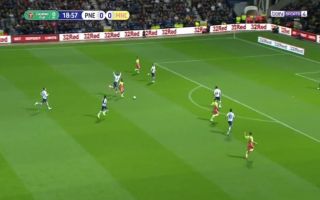 Raheem Sterling scored a brilliant solo goal for Man City this evening, as he opened the scoring in his side’s match against Preston in the League Cup.

The England international was opted to start against Preston tonight after failing to feature at all against Watford on the weekend, with the winger repaying Guardiola’s faith in him with a goal.

The Blues take the lead thanks to Raheem Sterling! pic.twitter.com/ZNQS6oAtU5

After picking the ball up around the half way line, Sterling burst forward, beating two players in the process, before firing home with his right foot.

Absolutely brilliant from the Citizens superstar!