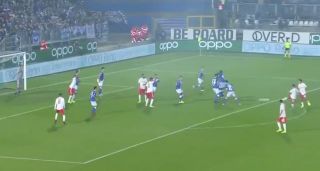 Juventus came from behind to secure a 2-1 win over Brescia on Tuesday night, with Miralem Pjanic sealing the three points with a superb strike.

Alfredo Donnarumma handed the hosts the lead after just four minutes before an own goal gave Juventus a way back into the encounter just before half-time.

SEE MORE: ‘He deserved the award’ – Club chief makes strong argument why Cristiano Ronaldo should have won FIFA Best award ahead of Messi

As seen in the video below though, Pjanic stepped up just after the hour mark as after an initial free-kick was blocked, the Juve midfield ace produced a sweetly struck long-range effort into the back of the net to complete the turnaround.

It was an important win for the reigning Serie A champions, as it moves them back to the top of the standings ahead of Inter’s clash with Lazio on Wednesday night.

Further, they sealed all three points without talisman Cristiano Ronaldo, who was left out of the squad to rest given the hectic schedule facing the Turin giants.

? Pjanic with a rocket to give Juventus a 2-1 lead over Brescia! pic.twitter.com/y54hJGSV7N