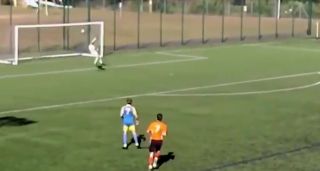 A game between King’s Lynn Elite and Cogenhoe United got off to an absolutely crazy start with two goals in the first 30 seconds.

Watch this video below from the Guardian, which shows the first team scoring an incredible long-range effort straight from kickoff…

The opposition then equalise just seconds later after restarting the match, with a well-worked move making it 1-1.

Is this the quickest two goals ever scored in a game?