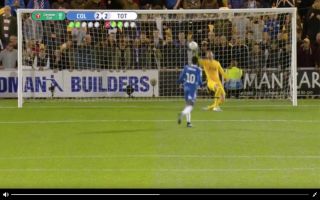 Tottenham goalkeeper Paulo Gazzaniga pulled off one of the coolest penalty saves you’ll ever see during his side’s defeat against League Two side Colchester.

Just look at how simple Gazzaniga made this look, this might be one of the coolest penalty saves ever.

It’s a shame his teammates didn’t bring their A-game in the shootout.

Check out the extraordinary save below:

Yeah, Spurs might have lost to Colchester United but at least Paulo Gazzaniga made one of the coolest penalty saves ever, sooo…pic.twitter.com/JBsHRoIgmX#THFC #COYS

Take a look at the former Southampton ace’s save halfway through this video as well:

Brown’s attempt was very cheeky, fortunately for him his missed penalty didn’t come back to haunt him this evening as Colchester United completed a magical giant killing with their shock Carabao Cup victory over Spurs.