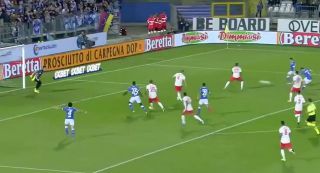 Juventus have had a difficult start to the season and it could be set to continue in their clash with Brescia on Tuesday night.

The Bianconeri managed to scrape a 2-1 win over Verona at the weekend as they haven’t yet entirely convinced as they look to defend their Serie A crown under Maurizio Sarri.

SEE MORE: Juventus look to Chelsea ace as they prepare for another impressive free transfer signing

In turn, they would have been hoping to produce a more assured performance in midweek, especially without Cristiano Ronaldo who was left out of the squad to rest due to an injury concern.

However, they may well live to regret that decision as Brescia broke the deadlock after just four minutes as Alfredo Donnarumma hammered them into the lead.

As seen in the video below though, Wojciech Szczesny won’t want to see the replay again any time soon, as although the shot was hit with real power, the Polish goalkeeper will undoubtedly be disappointed he wasn’t able to keep it out as it seemed to go straight through him.

? Donnarumma hammers Brescia into the lead as Szcz?sny is left red-faced!

?? Ronaldo resting and Juventus are in trouble early on at the Stadio Mario Rigamonti pic.twitter.com/OVaRj1jIFA

Poor from Sandro to allow Donnarumma to get the shot off, bad start for Sarri’s boys #BresciaJuve pic.twitter.com/KhSZls5N97