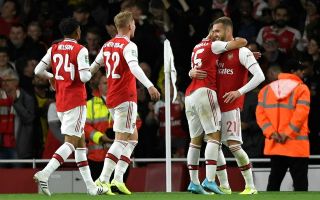 Arsenal defender Rob Holding has heaped praise onto exciting youngster Gabriel Martinelli after his two goals on his full debut for the club last night.

The Brazilian forward tormented Nottingham Forest with two fine goals in a 5-0 Carabao Cup victory at the Emirates Stadium, showing why Arsenal brought him to the club this summer.

Martinelli looked a bright prospect in his native Brazil, and it may be that the 18-year-old is already ready to make an impact for the Arsenal first-team.

Holding is certainly impressed with what he’s seen from the teenager, saying he’s been a real handful for him in training.

The 24-year-old himself is only just back from a lengthy injury layoff, so it was certainly a night of good news for Arsenal fans as many of their squad players made a strong case for themselves with convincing displays in this one-sided match.

Martinelli catching the eye in training against a quality defender like Holding means AFC fans can probably look forward to more from him soon enough if he can carry on impressing in this way.

“He’s been a handful in training,” Holding was quoted by the Metro.

“He’s a sharp lad and he’s a natural finisher. You saw that header, he’s a small lad and he got up there and won it.

“He’s impressive so hopefully he can continue with that.”