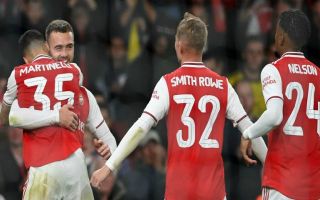 The 18-year-old joined the Gunners from Brazilian club Ituano this summer. He made his debut for Arsenal in their Premier League opener against Newcastle and did not play another match until last night. Making his first start for the Gunners, Martinelli scored a brace as his team thrashed Nottingham Forest 5-0 to advance to the fourth round of the Carabao Cup.

The 18-year-old may not get many first-team opportunities as the season progresses but he should start in Cup matches which might help receive more game time in the Premier League.

Several Arsenal fans were delighted with Martinelli’s performances last night and hailed him on Twitter. Here are some of the tweets hailing the Brazilian.

This kid is going places

Martinelli when he breaks into the first team pic.twitter.com/mJm7TDLpOa

After impressing last night, Martinelli will hope to produce similar performances whenever he gets the chance to feature for Arsenal.