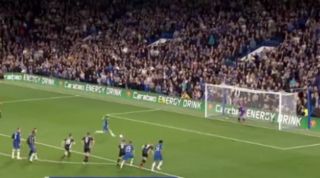 Chelsea regained their two-goal lead against Grimsby in the League Cup this evening, after Pedro converted from the penalty spot after the Blues won the spot-kick from a corner.

Just after the ball was crossed into the box from the set-piece, Kurt Zouma was hauled down, something that left the referee with no option other than awarding the home side a penalty.

And it was Spaniard Pedro who strode up the spot-kick, sending the keeper the wrong way as he gave the Blues a 3-1 lead going into half time.

Bet Chelsea fans were happy Barkley didn’t take this one!