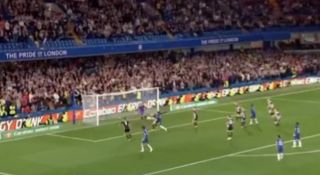 Kurt Zouma got himself on the scoresheet for Chelsea tonight, as the French international scored the Blues’ fourth in their match vs Grimsby.

The Blues had already been 3-1 up thanks to goals from Barkley, Batshuayi and Pedro, with Zouma then bagging in the second half to all but wrap up the win for the home side.

After a cross was sent into the box, Zouma met it with his right foot, as he stabbed the ball home on the volley to give Lampard’s side a three-goal lead.

Seems like everyone’s getting in on the act tonight!