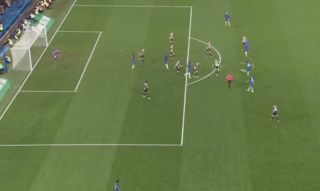 Chelsea defender Reece James capped off his return from injury with a brilliant goal against Grimsby tonight, as he gave the Blues a 5-1 lead against their League Two opponents.

Having gone 4-1 up earlier in the half thanks to Kurt Zouma, the home side soon found a fifth through youngster James.

After the ball fell to him on the edge of the box, James ended up firing home with his right foot, giving the Grimsby ‘keeper no chance.

Superb goal from the youngster on what is his first start back since his horrible injury in the summer!

Pictures via the EFL