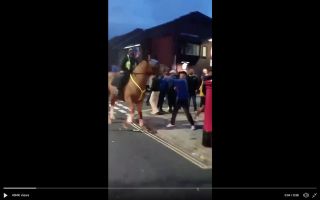 Footage of a Portsmouth fan punching a police horse has gone viral in the last 24 hours, the fan attacked the animal after his side’s 4-0 defeat against rivals Southampton.

One Portsmouth fan was filmed punching a police horse after being chased following Pompey’s 4-0 defeat against rivals Southampton last night.

The officer on the horse then chased down the fan and he was quickly stopped by police.

The attacker can be seen being struck by an officer with a baton after he was thrown to the floor following his disgusting assault on the animal.

Portsmouth Vs Southampton
Lad tryna swing for a horse ????? pic.twitter.com/O792Tn04TH

Fortunately justice is bering served as the Daily Mail report that the attacker was arrested and charged with animal cruelty, as well as attempted criminal damage.

The man who was arrested is 52 years old.