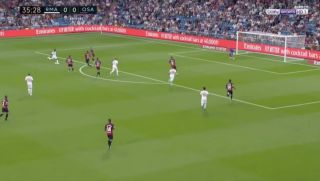 Real Madrid took the lead through Vinicius Jr tonight, as Los Blancos went 1-0 up after the Brazilian fired home from long range.

With the scoreline sitting at 0-0, the Brazilian decided that enough was enough, as he picked up the ball around 25-yards from goal before unleashing a ferocious effort that flew into the top corner.

? Vinícius Júnior curls one into the top corner to give Real Madrid the lead!

? It's the first goal of the season for the young Brazilian star, and look at what it means to him! pic.twitter.com/7inBbhtzZr

It was a superb effort from the winger, one that shows just how much he’s been working on his shooting recently following his lacklustre first year with the club.