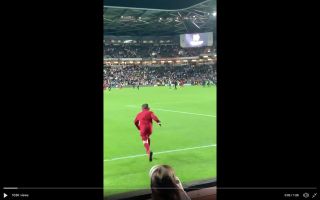 After Liverpool beat MK Dons in this evening’s Carabao Cup clash, this young Reds fan ran onto the pitch to meet his heroes and came away with Harvey Elliott’s shirt.

Liverpool supporter Paul Hughes took to Twitter after the Reds’ 2-0 win against MK Dons to share the wonderful moment that his son ran onto the pitch to meet his heroes after their Carabao Cup victory.

The youngster got the chance to meet some of Liverpool’s biggest stars and before he returned back to the stands he asked exciting talent Harvey Elliott for his shirt and he obliged.

What a class act Elliott is, this was his competitive debut for the Reds but he was still happy to give his match-worn shirt to the young fan.

It’s great to see a evidently die-hard fan like Paul getting a reward for his following of the team, the trip to Milton Keynes from Merseyside is quite the journey.

Take a look at the heartwarming moment below:

He was flapping all game about doing it, 'will I get arrested?'?? I said no i'm your dad and i've said you can, go and get whoever you want, he's a jammy get ????? pic.twitter.com/rM34v7FNi1

This Liverpool fan lived the dream and met his heroes tonight pic.twitter.com/JcuhwJoNbO

Elliott was a bright spark for Jurgen Klopp’s side tonight, the young Liverpool fan has got himself the debut shirt of a hugely talented player that could play for the Reds and England for the next 15 years.