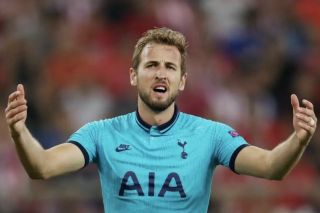 Tottenham star Harry Kane has conceded that his side can’t use any more excuses as he has called on them to react and get their season on track.

Spurs have picked up just eight points from their opening six Premier League outings which leaves them in seventh place in the standings and already 10 points off the pace set by leaders Liverpool.

SEE MORE: Blow for Tottenham as plans to offload star in £30m exit in January could fail

While they still have the top four in sight at this early stage, it’s not the start to the campaign that they would have been hoping for following on from reaching the Champions League final last season.

Many would have expected Tottenham to use that as a platform to go on and compete for major trophies again this season, but there are early concerns over their ability to do so.

Their miserable start was compounded by an exit from the Carabao Cup on Tuesday night after a penalty shoot-out against Colchester, and so it’s only to be expected that they are now facing some tough questions.

Kane has tried his best to react positively and keep heads up by insisting that there is still plenty of time for his side to turn things around, but he has conceded that there are no more excuses now for Tottenham as they continue to fall short.

“I’d say it’s been disappointing, I don’t think there’s any hiding behind that,” he told Sky Sports. “To only win two games out of our first seven is not the standards that we’ve set in previous years.

“We’re not inexperienced any more, we’re not young any more, the excuses aren’t there for us any more. It’s down to us players to take responsibility.

“If this was January or February people would be saying there’s no chance of us winning it. Obviously it’s not the ideal start, but stranger things have happened. You can never rule yourselves out until it’s done.”

Spurs host Southampton on Saturday afternoon in what is now a hugely important encounter as they’ll see it as an opportunity to boost morale.

That’s followed by a Champions League clash with Bayern Munich next Tuesday, and so back-to-back wins in those two outings could certainly get Mauricio Pochettino’s men on track after a disappointing few weeks.