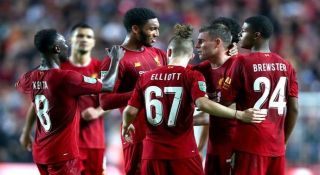 Liverpool manager Jurgen Klopp has said that Naby Keita will give fine performances on the field once he finds more playing time.

The Guinean international was out of action for a while due to an injury but he made his return in yesterday’s Carabao Cup fixture against Milton Keynes Dons. He played 63 minutes before being replaced by Pedro Chirivella.

Keita produced a decent performance throughout the match and Klopp feels that the 24-year-old will put in better performances once he gets more game-time. As quoted by Goal.com, the Liverpool manager said: “Obviously he looked good in moments, he looked really good in moments, but he has to adapt to the position again. You see it with Ox [Alex Oxlade-Chamberlain] as well. Naturally, you move much more and stuff like this, you find each other much more, but that’s how it is.

“He was out for a while, but in moments you saw what an incredible player he is and how important he will be for us. We don’t have to rush it now hopefully, but we can use him now and that’s good, good for us. There’s a long season to go and everything will be fine.”

Keita seemed in good touch yesterday and Klopp will certainly consider giving him more playing time as the season progresses. It won’t be easy for the 24-year-old to get into the starting XI with the number of midfielders they have but there’s every chance of making substitute appearances in the Premier League while starting in other competitions.

Liverpool’s next fixture is against Sheffield United on Saturday and they will hope to maintain their 100% record in the Premier League this season.