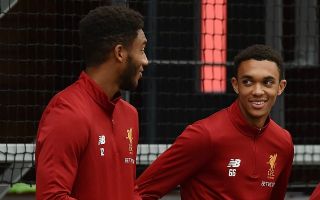 The 22-year-old shone in the Reds first-team last season before injury derailed his progress and saw Joel Matip come in in his place.

MORE: How Liverpool should line up vs Sheffield United, with new-look front three

The former Cameroon international has now cemented his place alongside Virgil van Dijk, leaving Gomez out of favour with Klopp even though he’s now fit again and available for selection.

Speaking about his situation, it’s clear Gomez wants to play more, though he doesn’t seem too keen to agitate over the situation.

Discussing his bid to break back into the England set-up, Gomez said, as quoted by the Daily Mirror: “I cannot blame him (Gareth Southgate). He speaks to me and is a great manager but if you meet up with England you are expected to be playing so I have to keep working hard.

“I have not been playing and every footballer wants to be playing.

“At the same time I understand that we are European champions and the lads are doing very well at the minute so all I can do is keep my head down, keep working hard in training, and wait for my chance.”

Liverpool fans will no doubt hope the young England international can find some way back into the team in the near future as he looks a big talent.

However, it’s hard to see him getting past Matip at the moment, while Van Dijk is also surely not going to lose his place any time soon.

All in all, it’s probably a nice problem for Klopp to have.