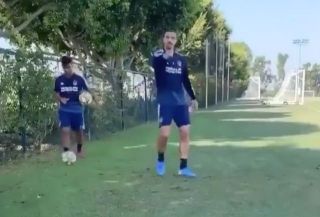 Zlatan Ibrahimovic was enjoying himself in LA Galaxy training this week and was particularly pleased with this effort from an unlikely angle.

Filmed prior to Galaxy’s 2-1 win over Real Salt Lake on Wednesday night, a game in which Ibrahimovic scored, the Swede was busy keeping himself entertained in training.

As seen in the video below, he was trying to score from an almost impossible angle, but he somehow managed to wrap his boot round the ball to get enough curl on it to find the back of the net.

A frantic check followed with the camera crew to see if he had achieved his goal, and it’s quite amusing to see him so animated given his usual cool and calm demeanour especially after finding the back of the net in matches.

Nevertheless, Ibrahimovic was pretty happy with this one, and there’s no doubt that this clip will be getting plenty more views…

Video: Huge celebrations from Romelu Lukaku as he assists Martinez for Inter opener vs AC Milan