The 27-year-old has worn the armband in six of Arsenal’s eight matches across all competitions this season, after the summer departure of former skipper Laurent Koscielny.

Xhaka has often been criticised for his inconsistent displays at Emirates Stadium since his arrival in north London back in 2016, but he has been a regular in the Gunners line up under Emery.

According to BBC Sport, the Spanish boss has officially confirmed the Swiss midfielder as club captain on Friday, after consulting with the rest of the Arsenal squad.

Emery has not yet chosen a vice-captain, but it is understood that prolific forward duo Alexandre Lacazette and Pierre-Emerick Aubameyang are the main candidates for the role.

Arsenal fans have reacted angrily to Emery’s decision to hand leadership duties to Xhaka, with the divisive star set to begin his new role away at Manchester United on Monday.

One supporter wrote “Xhaka captain. Dark day for this club!” on Twitter, which is an opinion shared by the majority of the Arsenal faithful on social media right now. 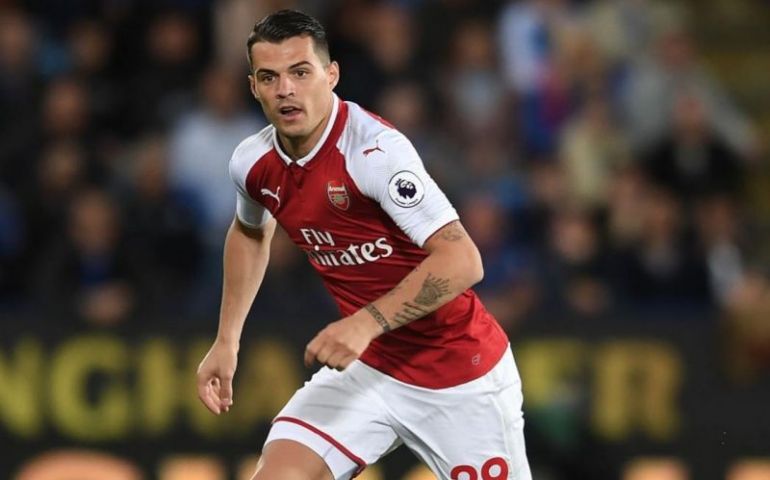 Xhaka in action for Arsenal

The Gunners have lacked a leader on the pitch since the days of Patrick Viera, who led the team to their last Premier League title way back in 2004.

Emery’s side look a long way off challenging for major honours once again this season, with a lack of quality and direction in defence and across the midfield costing them in big matches.

Xhaka’s erratic style of play does not exactly inspire confidence, with many supporters insisting that he shouldn’t even be a regular in their starting XI.

Check out some more comments from disgruntled Arsenal fans below.

Hmmm, I’d have made Guendouzi captain. He seems a more natural leader & more guaranteed his place in the team.
Xhaka has a lot to prove. https://t.co/3Tzhm3xRtp

Xhaka is the new permanent captain of Arsenal FC???? pic.twitter.com/tMxAlWFPxg

Naming Granit Xhaka as #AFC‘s captain just further reiterate my point that Unai Emery isn’t the right man for the job. Even Matteo has more captain qualities than Xhaka, such shame..

Xhaka is the captain? Thought Auba/Laca is more deserving.

This is a disastrous decision.
I wonder what Emery has been smoking to name Xhaka as captain.
He is not even good enough to be in @,Arsenal starting 11.
Its horrendous, disgusting and distasteful decision and l am struggling to see the logic in this. https://t.co/zNd4cuihGr

For every mistake that Xhaka makes on the pitch, for every poor & laboured passage of play by Xhaka, it won’t be his fault anymore. This is Emery’s. Xhaka should NOT be starting for Arsenal. Everyone will be in their right to blast Emery for it. If it goes well, kudos #Xhaka #AFC

Whether we like it or not Xhaka is our captain, even I’m surprised as I would not have him in my starting 11, but what’s moaning going to do, get behind him and accept it.