Barcelona take on Getafe in La Liga this weekend, as the Blaugrana look to build on the win they manage against Villarreal in midweek.

Barca got back to winning ways on Wednesday, as they beat the Yellow Submarine 2-1 at the Nou Camp thanks to goals from Griezmann and Arthur Melo.

And now, Ernesto Valverde’s have the difficult task of going to Getafe this weekend, who themselves are just three points behind their Catalan opponents.

Given their away record so far this year, you can’t blame Barca fans for not being overly optimistic ahead of Saturday’s clash.

Barca are yet to win away from home in all competitions this season, drawing two and losing two of their four away fixtures.

Report: Brazil has submitted its call ups to FIFA and it includes Premier League players
‘That Made Me Very Happy’ – Inter Miami Striker Comments on Seeing Lionel Messi Win the Copa America
Potential nightmare for Derby County and Wayne Rooney as club enter administration and 12-point penalty to be issued

For the match, Barca are without both Ansu Fati and Lionel Messi, after both were left out of the club’s squad for Saturday’s game.

Thus, we could see a very makeshift attack on show tomorrow, as Barcelona look to come away from the Coliseum Alfonso Pérez with all three points.

Ousmane Dembele impressed during the second half on Wednesday, and given how Suarez performed during the win against Villarreal, we wouldn’t be surprised to see the Uruguayan dropped in favour of the Frenchman tomorrow.

Suarez was woeful against Villarreal, with the 32-year-old missing a hatful of easy chances to increase Barca’s lead during the first and second halves.

Therefore, we could very well see the trio of Dembele, Perez and Griezmann lead the line for Valverde’s side tomorrow afternoon.

The Spaniard, who recently penned a new contract with the club, has impressed when given the chance to this year, something that means we could easily see him play tomorrow.

Given that he sit out against Villarreal for most of the match, Frenkie De Jong should be brought in to play alongside Arthur Melo and Sergio Busquets on Saturday, a trio that could prove to be the difference between the two sides.

Given that Jordi Alba’s still injured, a backline a Junior Firpo, Lenglet, Pique and Semedo should be deployed ahead of Ter Stegen, as the club look to keep their first clean sheet in the league this year.

After all of this, here’s how the Blaugrana could line-up for their clash away to Getafe tomorrow… 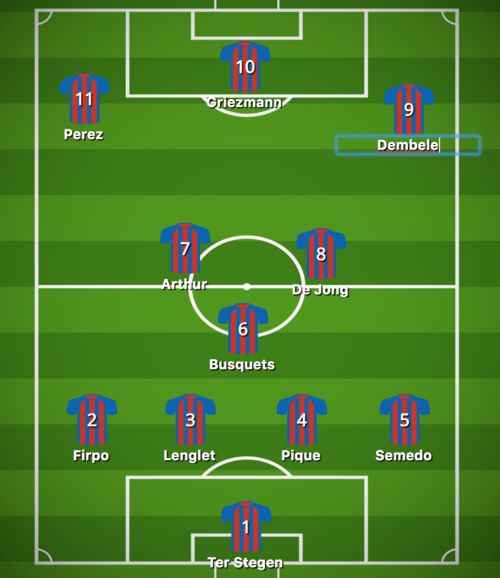