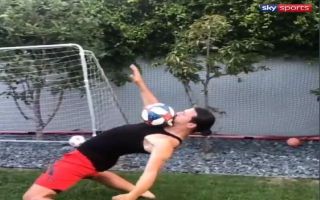 It certainly won’t come as a huge surprise to the man himself, but Zlatan can do some pretty incredible things with the football.

The 37-year-old has been the subject of transfer speculation this week, with his agent Mino Raiola rejecting talk he is set to quit LA Galaxy.

As noted by the Daily Mail, he had been linked with a move to Boca Juniors, but that talk seems to have been shut down and he has instead been focusing on dazzling in training instead.

If you’ve read his book you will know he spent most of his young career trying outrageous flicks and skills during games until Fabio Capello decided to “beat the Ajax out of him” and turned him into a ruthless goal machine.

A video has emerged of him doing a “matrix” challenge which involves balancing the ball while doing some slow motion moves. It’s pretty incredible but surely not useable in a game:

Reckon you can give it a go? ?

Reply to this tweet with your efforts and we’ll get the best on Sky Sports News! ? pic.twitter.com/zXt5V4GF36

I’m not actually convinced I could do this without a ball but the Swedish star makes it look so effortless. You could only imagine the reaction of the opposition players if he attempted this in a game, perhaps it would be effective in the corner as a way to kill time?