This is already the most ridiculous story of the season and will take something incredible to beat it. The Spanish authorities have also set themselves one almighty precedent when it comes to handing out any other punishments in the future.

As reported by Sky Sports, Barcelona are set to appeal their £265 fine they received for illegally tapping up Antoine Griezmann when he was an Atletico Madrid player.

The main problem with this is they potentially did Atleti out of £72m as they agreed a deal with the Frenchman at a time when his buy out clause was worth £180m, but they completed the signing when it was reduced to £108m.

To only be charged a few hundred pounds for such a serious offence is obviously a total farce, but the report also confirms comments from Ernesto Valverde that the club plan to appeal the fine. He said: “I don’t know the exact ins and outs of this question or how it stands legally. I understand the club is appealing.”

You can only imagine it’s the fact they were found guilty that Barca want to appeal, and not a case that they feel the financial implications from the fine would be too much to bear. 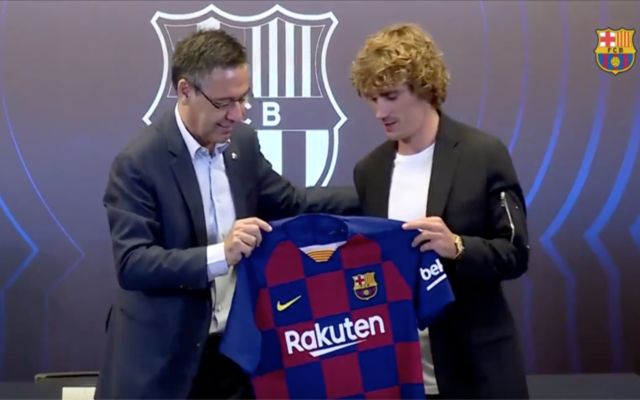 Signing unveiled after being tapped up

They could even decide to fine Griezmann himself to pay the fine. For context, when he signed with the Catalans, Sport reported he would earn a total of €21m per season after moving to Barcelona.

If you take the total fine at €300, this means it would only take him about eight minutes to earn the money to pay it off. It just further proves how ridiculous the whole situation and fine actually is.