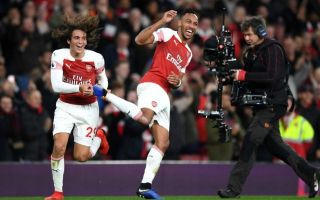 The Gabonese international joined the Gunners fro Borussia Dortmund last January and has since made 72 appearances for them, scoring 48 goals and providing 12 assists. Aubameyang has been in sensational form for Arsenal this season, scoring seven goals in as many matches.

MORE: Ex-Arsenal man states Emery “got it wrong” by handing Gunners captaincy to Xhaka over teammate

Speaking ahead of the Gunners’ encounter against Manchester United, Hoddle hailed the 30-year-old striker. As quoted by Metro, the Spurs legend said: “This fella [Aubameyang] is different class. How many of those players at United would get into any other team in Europe? I’m not so certain. Pogba at his best possible possibly however anybody else I’m undecided. Maguire, presumably. Aubameyang would walk into any team. Any team!”

The Arsenal striker has been in excellent form ever since joining them. Last season, he netted 31 goals in 50 appearances across all competitions, being one of the three players who were jointly awarded the Premier League Golden Boot. Aubameyang will be aiming to be the top scorer in 19/20 as well and he has started brilliantly.

Arsenal’s chances of qualifying for next season’s Champions League depends greatly on the 30-year-old finding the net. Aubameyang will be eager to increase his goal tally on Monday when the Gunners face Manchester United at Old Trafford.