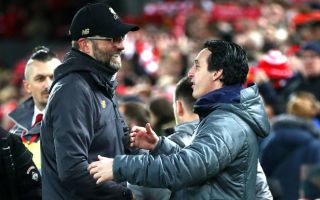 Several Arsenal fans have responded happily after finding out that Liverpool will face an investigation over fielding an ineligible player in the Carabao Cup.

The Reds qualified for the fourth round of the competition by beating Milton Keynes Dons 2-0 thanks to goals from James Milner and Ki-Jana Hoever. However, the Sun claim that Liverpool could face an investigation over fielding an ineligible player in that game and have a chance of being disqualified from the Carabao Cup.

Arsenal are the Reds’ opponents in the fourth round but if the latter are suspended, the Gunners may have to play another team which could certainly better their chances of reaching the quarter-finals. Several of the North London club’s fans have expressed their delight on the possibility of not facing Liverpool in the next round.

Free pass into the QF boys ?

Hope this is true . It would be awesome .

Our only hope of qualifying for the next round. ?

It will be interesting to see what the outcome of the investigation is. Sunderland fielded an ineligible player in a few league matches some years back and all they received was a fine. Maybe the same will happen with Liverpool.