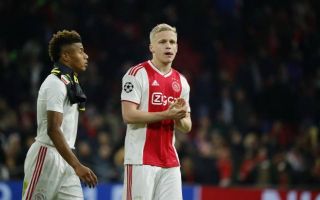 The Brazilian international has become an integral part of the Eredivisie giants since joining them from Sao Paulo in 2017. So far, the 22-year-old has amassed 31 goals and 33 assists in 111 appearances across all competitions.

Neres rose to prominence with his incredible performances for Ajax last season. The winger scored 12 goals and provided 15 assists as de Godenzonen won a domestic double of the Eredivisie and KNVB Cup while reaching the semi-finals of the Champions League. Neres was in the tournament’s Team of the Season along with four of his teammates.

His performances for Ajax last season earned the winger a call-up to the Brazil national team and later, a place in the squad that won the Copa America this summer. Neres started the first two matches of the competition. This season, he has netted twice while providing an assist in 12 matches across all competitions.

Calciomercato claim that Liverpool are interested in signing Neres who is valued at €45 million according to Transfermarkt. The Brazilian international is among the finest wingers in Europe and his addition would certainly bolster the Reds’ attack which is already very lethal. However, Neres will find it hard to find first-team opportunities due to the presence of the likes of Mohamed Salah and Sadio Mane.