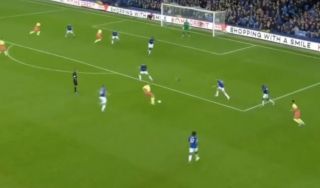 Gabriel Jesus opened the scoring for Man City against Everton this afternoon, after he headed home following a fine ball from Kevin De Bruyne.

City have been largely dominant in the early stages at Goodison Park, with Gundogan and Mahrez missing chances in the opening 10 minutes.

Despite this, City still kept plugging away, eventually breaking the deadlock, after a superb ball from De Bruyne was headed home by the Brazilian.

De Bruyne further establishing himself as one of the best in the league following that brilliant assist!