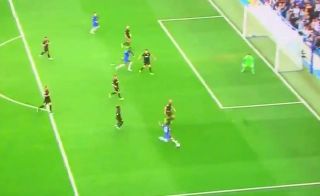 Chelsea took a commanding 2-0 lead over Brighton on Saturday as Willian bagged their second following some great work by Callum Hudson-Odoi.

The youngster has been busy stepping up his comeback in recent weeks for the U23s side, and he was brought off the bench at Stamford Bridge this weekend.

He certainly wasted no time in showing what he can offer Frank Lampard, as he helped Chelsea break quickly and set up Willian to score their second, as seen in the video below.

Brighton made a real game of it against the Blues and will have been desperately disappointed to concede the second goal after pressing and looking a threat themselves.

However, it was Willian who broke their resolve and that could ultimately prove to be a decisive moment in the encounter as Chelsea look to secure all three points after suffering defeat to Liverpool last time out in the Premier League.

?? Another game, another goal contribution for Hudson Odoi as he assists Willian 8 minutes after coming on! pic.twitter.com/mf7U3uB0Yu

A blistering counter-attack, and an assist on Callum Hudson-Odoi's #PremierLeague return.

Willian puts Chelsea 2-0 up and all but secures their first #PremierLeague win at home under Frank Lampard ?#CHEBHA pic.twitter.com/PeeeuCDcBZ