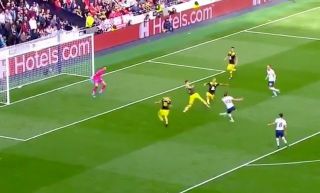 Tottenham had an eventful first half in their clash with Southampton on Saturday, as Harry Kane restored their lead just before half-time.

Spurs went ahead after 24 minutes thanks to Tanguy Ndombele, but then saw Serge Aurier sent off just minutes later as it seemed as though their afternoon could be going downhill.

Danny Ings bagged an equaliser soon after to heighten their concerns, but Kane was on hand to put his side back ahead before the break in what could potentially be a decisive moment in the encounter.

As seen in the video below, there was some brilliant build-up play between Heung-Min Son and Christian Eriksen in the lead up to the goal, as they combined well to set up Kane.

In turn, the England international was on hand to strike with a good finish to put Tottenham back ahead, and so they will hope to defend their lead in the second half to secure three important points.

What a response by 10man Spurs!! Oh the emotional roller coaster that they give us!! HurriKANE! ?@HKane? #COYS #TOTSOU pic.twitter.com/pN2zogrJQ5