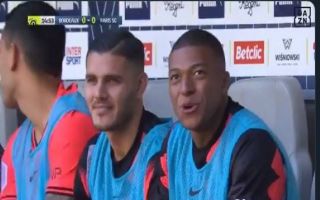 It must be pretty tough moving to a new country and trying to integrate into a new way of life while also trying to fit into a new squad of players.

It must be doubly tough when teammates openly dislike you because you had an affair with the girlfriend of an ex teammate. Mauro Icardi and his wife Wanda are notorious and fairly easy to dislike.

READ MORE: Icardi struggling to settle at PSG as Argentine players still hate him for affair with teammate’s girlfriend

That hasn’t stopped PSG star Kylian Mbappe doing his best to try and make the Argentinian feel welcome. He was caught on video trying to laugh and joke with the former Inter star during today’s game:

Kylian Mbappé’s humanity isn’t discussed enough. Despite the 6-year age gap, nobody‘s made more effort to welcome Mauro Icardi to PSG. From taking Icardi on a jet he chartered to go to Lyon to constantly trying to joke w/ him despite the language barrier. pic.twitter.com/xagGVQGG4F

He might have a tough time trying to win over the Argentine teammates, but at least he has one friendly face who looks happy to have him there.