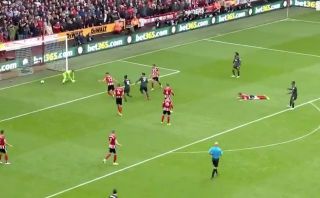 Liverpool were given a real test by Sheffield United on Saturday but Dean Henderson gifted them the lead in the second half with a huge blunder.

The hosts were impressive at Bramall Lane in the early kickoff, as they created dangerous opportunities for themselves and limited the Reds.

Sadio Mane will feel as though he should of got himself on the scoresheet in the first half after missing two great chances, but Liverpool’s luck turned after the break.

As seen in the video below, Georginio Wijnaldum’s tame effort squeezed under Henderson and rolled into the back of the net as the Sheffield Utd goalkeeper was left to watch as he agonisingly conceded the first goal of the game.

Having been so impressive in their promotion push last season and to start the Premier League campaign, it’s a huge blow for him and the Blades, and it now risks seeing them left deflated after such an impressive performance up to that point.

It wasn't pretty, but Liverpool find their goal!

Catch the rest of this one on NBCSN! Or stream it here: https://t.co/CsjFpf1HEU pic.twitter.com/KCIDDHfaib