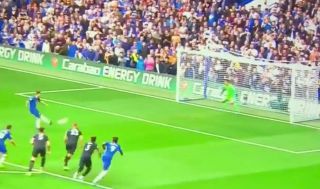 Jorginho has an exceptional record from the penalty spot and the Chelsea midfielder showed why against Brighton on Saturday.

The Blues were held after 45 minutes at Stamford Bridge as they couldn’t find a breakthrough against a well organised Brighton side, but they eventually broke the deadlock shortly into the second half.

After being awarded a penalty, Jorginho stepped up from the spot and made no mistake as he nestled his effort into the back of the net, as seen in the video below.

Brighton goalkeeper Mathew Ryan didn’t even move as he tried to call his bluff by waiting down the middle, but unfortunately for him, it made Jorginho’s task all the more simple as he gave Chelsea the lead in a key game that Frank Lampard will be desperate for three points in.

Time will tell if that goal opens the floodgates for Chelsea or if Brighton can respond, but either way, it could be a decisive moment in the encounter with Jorginho delivering from the penalty spot again.

Jorginho slots it home from the spot.#CHEBHA

Jorginho scores for Chelsea from the spot!

Watch this one right now on NBCSN, or stream it here: https://t.co/yQRCusoPOj pic.twitter.com/iL40uyq8D7

Jorginho is cool from the spot and gives Chelsea a 1-0 ?#CHEBHA pic.twitter.com/jjh1xUtSit

That's how to do it. pic.twitter.com/NokD2I1rjm