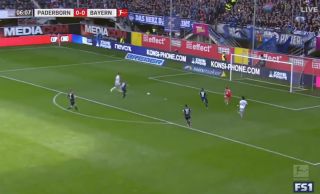 Robert Lewandowski produced a truly awful miss this afternoon, as he fluffed his lines in Bayern Munich’s game against Paderborn in the Bundesliga.

Lewandowski has been on fire for Bayern this year, however he seemed to forget his shooting boots for today’s match, as he somehow missed an open goal when it looked easier to score.

After the ball was played across by Gnabry, all the Pole had to do was tap the ball into an empty net, however he somehow missed the target altogether.

He certainly wont’t be wanting to watch that one back!

Pictures via the Bundesliga