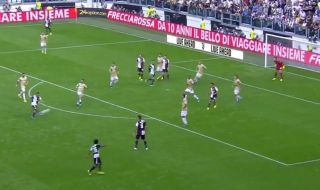 Juventus were made to wait to find a breakthrough against SPAL on Saturday but Miralem Pjanic ensured they did so in some style.

The Bianconeri were looking to avoid dropping any more points as they continue to chase rivals Inter down at the top of the Serie A table.

There may have been some nervous faces in the stands though as they had to wait until the 45th minute to find a way to break the deadlock against SPAL.

However, as seen in the video below, Pjanic ensured that it was worth the wait as he let fly from distance with a first-time shot that went sailing into the back of the net.

It was a world-class finish from the midfield maestro, and he’ll be delighted to get another goal to his name to add a more decisive touch in the final third to Juve’s play.

Having found a breakthrough just before the half-time interval, it remains to be seen if that opens the floodgates for the reigning Serie A champions…

Miralem Pjani? gives Juventus the lead with a fabulous finish!